The Beautiful green of the forest

Eva lets you taste the forest
Forest walk. Mushroom picking excursion. Grandpa’s carpenter shed. Eva Magnusson has heard many ways to describe the taste of her granola syrup. She gathers most of the raw materials for her products in the forests along the banks of the river Ljungan.

– Spruce is high in vitamin C and has been used in various ways throughout history, including as a cough medicine. I’ve heard that it used to be so important that in some places it was simply called ‘The Tree’, says Eva Magnusson.

“The tree” was the seed of what would become Skogens Sköna Gröna, Eva’s company that refines flavours from the forest. After a course in food crafts in 2007, she made her first syrup, which was well received, including in the restaurant world. She has received several awards, both for the syrup and other products.

– The consistency is similar to maple syrup but it has its own unique taste. It is very good on yoghurt, with pannacotta, dried/smoked meat or cheese. And if you’re out hiking, it’s good to drip some in a cup of tea, says Eva.

Eva boils some eggs in her production kitchen in Ånge, a few kilometres from St Olav’s trail. She slices them and puts them on a cracker tray. Then she takes another of her products, the sea salt, and sprinkles it on. The result is surprisingly herbal and fresh.

She picks the raw material for the syrup and salt along the banks of the Ljungan, from the beginning of June and a few weeks later when the spruce sprouts. Then it’s the turn of the elk brat, the base for her prized Elk Queen Juice.

– It is sold at the pilgrimage centre in Selånger, the tourist office in Borgsjö and several other places along the route.
What she doesn’t find in the forest is grown in the kitchen garden at home in Kölsillre near Ånge. Mountain quince, libstickka, blackcurrants and strawberries. Most of it is used and Eva is happy to share tips on herbs and vegetables. A bouquet of flowers she picks along the path turns out to contain a lot of edibles: midsummer flowers, red clover and milkweed, for example.

– Nowadays, people talk a lot about the calming effect of forests – smells and sounds that help us to relax. To have a jar that tastes like that is fantastic to me. 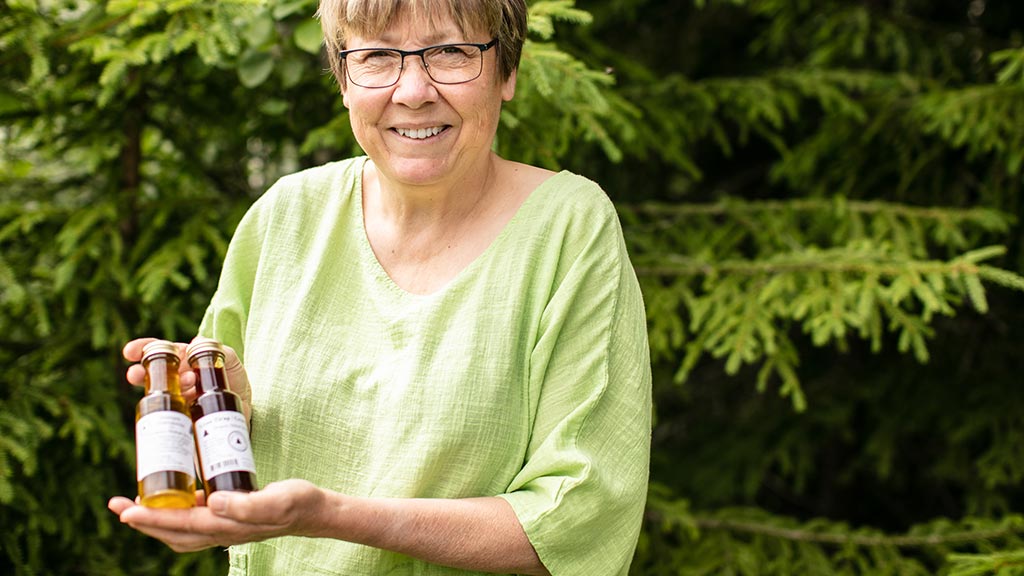 Where: Selångers Pilgrimage Centre, the Tourist Office at Borgsjö Naturum and in some shops and restaurants, from Sundsvall all the way to Östersund.

Don’t miss: Granola syrup in a cup of tea or on your breakfast yoghurt. A glass of cold Elf Queen Juice made from elk’s brittle, a medicinal plant sometimes called Norrland elder.

Other: Also sells through its own online store. Can produce food packages with local food experiences – cheese, dried meat, etc. in combination with her own products